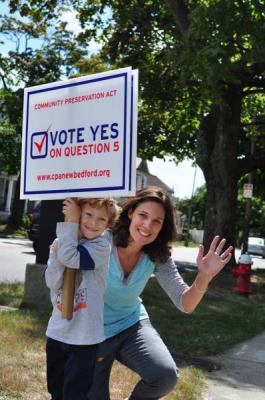 In 2013, a group of local activists from the city of New Bedford contacted the Community Preservation Coalition (“the Coalition”) to find out more about how the Community Preservation Act (CPA) could help them preserve the city’s many historic buildings and sites. They were particularly motivated by Fall River, their sister city, which had been successful in adopting CPA in 2012. Coalition staff members met with the activists, and helped them design outreach materials to use in pulling together a network of interested stakeholders to launch a New Bedford CPA adoption campaign.

The first order of business for the campaign committee was to convince the New Bedford City Council to advance the CPA question to the local ballot. Two politically-connected activists from the campaign met with each city councilor to ask them to support sending CPA to the ballot in 2014. With a unanimous vote of the City Council, and with the support of the Mayor, the CPA question advanced to the city’s November 4, 2014 ballot. The Campaign next developed a comprehensive, strategic outreach and communications plan and a detailed campaign budget. It quickly brought in funds from several local foundations, as well as from individual donors and local businesses. With this strong start, the campaign held a well-publicized formal launch event in September at a picturesque waterside park, in front of a historic building in need of rehabilitation.

To prepare for their outreach efforts, the campaign wrote and published collateral materials, including a white paper, a brochure, ‘Vote Yes” lawn signs, a press release, a true/false sheet, and a PowerPoint presentation. A campaign Facebook page and an interactive campaign website were developed and actively managed by a web designer at the Buzzards Bay Coalition. The Campaign assembled a large outreach team of diverse stakeholders interested in historic rehabilitation, parks and open space and to a lesser extent, affordable housing in New Bedford. They then scheduled and held over 30 community outreach meetings, and participated in a variety of neighborhood and local events. Fortunately, the New Bedford Economic Development Council endorsed CPA early on, and secured helpful campaign donations from business leaders. Of particular importance to the campaign’s ultimate success was positive media coverage - The New Bedford Standard Times formally endorsed CPA for New Bedford, published several pro-CPA op-ed pieces and letters to the editor, and the campaign secured two positive editorials after meeting with the Standard Times Editorial Board. The Campaign also purchased and ran a full-page color advertisement in The New Bedford Standard Times two days before the election. Supporters were interviewed on local cable TV and radio stations. Finally, New Bedford Mayor Jon F. Mitchell hosted a formal press event endorsing CPA a week before the election, which further boosted the campaign’s efforts. 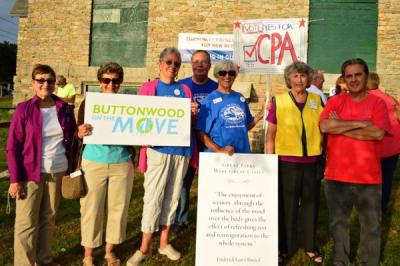 As part of the Campaign’s get-out-the-vote work, three separate direct mail pieces were created. These were sent to over 17,000 likely voters throughout the city and hand-delivered to nearly 1,000 likely voters the weekend before the election (the first piece was mailed two weeks before the election, the second piece one week before, and the last piece three days before.) On Election Day, the campaign distributed palm cards to voters at the polls, held signs, and wore “Vote Yes” for CPA stickers.

Luckily, New Bedford CPA campaign faced very little active opposition. One citizen activist wrote a letter to the editor addressing some concerns, and the Southeastern Regional Planning and Economic Development District’s President responded in a separate letter to the editor.

The result on Election Day was extremely positive - New Bedford voters supported the CPA measure by a comfortable 54% “yes” to 46% “no” vote, becoming one of three communities to pass CPA in November 2014. The Land Trust Alliance featured the results of the New Bedford campaign in their national magazine Saving Land. The article discusses how local land trusts, like New Bedford's Buzzard Bay Coalition, can be active in helping to pass conservation funding ballot elections.

The New Bedford campaign worked well because its leaders were committed to the cause and were prepared to take on the challenge of running a strong, positive campaign and educating the voters. The campaign was effective at raising funds for printed materials, a web site, and direct mail pieces, and in using the local press to get its message out to key influencers and active voters, including seniors. Working closely with experts at the Coalition and The Trustees of Reservations who were experienced in running CPA campaigns in other communities, provided a wealth of knowledge to draw upon. Election Day was sunny and relatively warm, which increased voter turnout. A larger team of volunteers would have been beneficial to the campaign, especially on Election Day. The campaign did not have the time or resources to conduct a phone banking program, which may have turned out even more support. However, all-in-all, it was a successful, positive, and well-run campaign, of which New Bedford CPA supporters can feel proud.