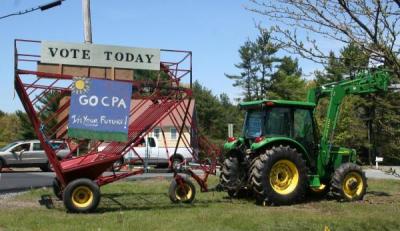 The May 2008 election was Plympton's third attempt to pass the CPA. Many pressures on the town had culminated in a strong need for the solutions that the CPA could provide. A casino planned for the nearby town of Middleborough created new stresses for Plympton, such as a heightened awareness of the need to be able to have a say in affordable housing development and open space protection. Many in the town realized that everything they wanted to do – particularly the development of affordable housing – was actually do-able, with the right resources.

The campaign was well balanced between the three major programmatic areas of the CPA: affordable housing, historic preservation, and open space. Because this was the third time that the CPA was up for approval, the campaign group felt it needed to do less voter education and more work securing the yes votes, by targeting voters and encouraging citizens to get out and vote. They promoted a 1.5% surcharge, which was significantly lower than the 3% surcharge they had previously promoted. The lower surcharge made CPA seem more approachable for many residents. To promote the campaign, the group sent out mailings and conducted informational seminars. Some campaign volunteers also made calls to friends. A canvassing effort in the neighborhoods was very successful, and direct support was also garnered through the informational seminars. The committee mailed letters to elected town officials that included a reply card, so the officials were required to sign the card and send it back if they wanted to support the campaign. This ensured that all of the endorsers were truly committed.

The Plympton campaign was able to ensure support for the CPA through one-on-one contact with voters and by employing a creative way to induce town leaders to commit to the campaign. In a previous CPA attempt, they handled opposition by targeting people in the opposition’s circle of influence and swaying their opinion favorably to CPA. Campaign leaders also stressed the importance of staffing the campaign well and enlisting campaign workers who are excited to get out and do things and who like to talk to others about how the CPA can be great for the community. This is especially important if, as in Plympton, you need to get the measure on the ballot through the ballot question petition process.