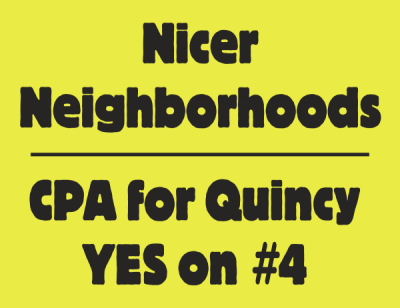 After CPA passed by 57% of the vote on November 7, 2006, Steve Perdios, campaign organizer and subsequent Chair of the City's new Community Preservation Committee, was pleased that all the campaign's hard work paid off. CPA came to the forefront in Quincy primarily as a result of concerns over losing open space.

A group led by Mr. Perdios first attempted to put CPA on the ballot in 2005 via a vote of the City Council, but was unsuccessful. However, Mr. Perdios and a group of about 10 steadfast volunteers did not give up. In the summer of 2006, they successfully gathered about 4,000 signatures on a petition to put CPA on the ballot. The signatures were gathered primarily by volunteers manning tables outside of supermarkets and armed with talking points and flyers about CPA. Not only was the effort successful at gathering signatures, but it accomplished widespread outreach and education about CPA.

The campaign committee raised $7,000 and worked with up to 35 volunteers, of which there were about 10 core volunteers. The campaign committee was also supported by efforts of the Quincy Environmental Network, a local open space protection advocacy group. The campaign committee strategically focused on getting the word out to people who were most likely to vote. They began with a list of all people who voted in all of the last six elections, which narrowed the master list of over 50,000 to about 10,000 names. The committee focused on getting at least one good piece of literature into the hands of each of those 10,000 voters. Literature was distributed in one of two ways: door to door and mailings. Using maps that highlighted the targeted voters' residences, a small army of volunteers went door to door in each of the 30 precincts leaving door knockers. For voters on the list of 10,000 who lived in large apartment complexes that had limited access, the committee mailed literature. These drops were made within two weeks of the election and, according to Perdios, worked like a charm.

In addition to the door to door effort and the limited mailing, the committee also organized press events, community meetings, letters to the local press, a guest appearance on Quincy Access Cable, and use of a phone bank. The phone bank accomplished about 80 phone calls with local volunteers and another 500 by contracting with a firm. Although the CPA campaign only had the support of two city councilors, the other seven did not officially oppose CPA. Also, the Mayor did not take an official position. The lack of official opposition was a boost to the campaign.

As Mr. Perdios explains, “It’s a lot of hard work. You’ve got to dedicate yourself for at least six months – just hunker down, really allocate time, and get it done. Expect everyone to come out against you and work your tail off. And, finally, don’t get greedy, 1% is a lot of money.”