Since its construction in 1893, the Schooner Ernestina-Morrissey has sailed under many names with many purposes, but has undoubtedly earned its place in maritime history. From its origin as a fishermen’s vessel, to remarkable Arctic expeditions, to its contemporary role as an educational vessel, the schooner received its designation as a National Historic Landmark in 1990. So when the city of New Bedford received their first slate of CPA applications in 2018, there was never any doubt how important it was to allow the Ernestina-Morrissey to set sail once again. Originally named the Schooner Effie M. Morrissey after Captain William E. Morrissey’s daughter, the vessel’s primary use was to transport fishermen and carry their catch back to port. About thirty years later, Captain Robert A. “Bob” Bartlett purchased the schooner with intentions of using it for Arctic exploration. For twenty years, Morrissey made frequent trips north to identify and study indigenous fauna and flora, and was actually the first sailing vessel to reach within 578 miles of the North Pole!

Morrissey was renamed Ernestina in 1948 after the purchase of the schooner by Captain Henrique Mendes (once again named after the captain’s own daughter). At this point, the schooner became a transportation vessel, carrying foodstuffs, supplies, and immigrants between the Cape Verde Island and the United States. In 1982, after restoring the Ernestina, Cape Verde gifted her to the United States, specifically to the Commonwealth of Massachusetts, where it currently resides as the official state vessel. In 1987, Ernestina received US Coast Guard certification, which marked the beginning of her next life as an educational instrument by way of taking school children onboard for maritime programs, environmental science lessons, and dockside trainings. 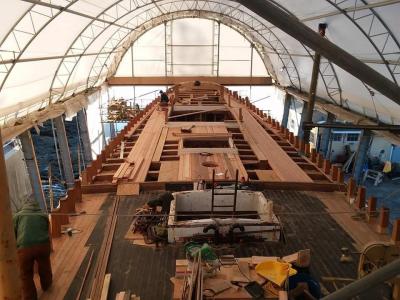 But in 2005, the Ernestina-Morrissey was denied US Coast Guard certification—bringing a halt to its century-long journey as an active sailing vessel. This prompted a series of requests for state and private funding for repairs with the hope of meeting the necessary standards to re-acquire its certification. Throughout this restoration, it would be imperative that all of the vessel’s significant historical characteristics be in compliance with the Secretary of the Interior’s Standard’s for Historic Vessel Preservation Projects. And so in 2008, the Schooner-Ernestina Morrissey Association (SEMA) was formed, with a primary mission of raising funds to restore the vessel.

In 2018, SEMA’s restoration efforts for the newly christened Ernestina-Morrissey (renamed to honor both parts of her history) was one of 35 applications that came in during New Bedford’s first year of CPA implementation. According to Jessica Bailey, the CPA Coordinator for the city, the Ernestina-Morrissey was quickly approved for its full funding request due to its clear historic value: “it represented historic preservation for our community—this was a shining example.” Between SEMA, private donors, and $2.5 million in state funding, over $6 million has now been pledged for the restoration of the vessel. SEMA received $100,000 in CPA funding from New Bedford, which has proven to have a twofold purpose. Not only did this money account for 10% of SEMA’s commitment to contribute $1 million, but it was also used to leverage other funds through a matching grant. The CPA funds went towards completing Phase 1 work on the schooner, which included an extensive rebuilding of the vessel’s hull. Reconstruction is currently in the middle of Phase 2, which involves outfitting the rig and work below the deck. Upon completion of the vessel’s restoration, Mass Maritime Academy will assume its role as caretaker of the Ernestina-Morrissey.

Allowing the Ernestina-Morrissey to set sail once again truly is a “shining example” of how CPA can help breathe life into the elements of our history that deserve to live on. Mary Anne McQuillan, Secretary of SEMA, made it clear how vital the full restoration was in preserving the vessel’s historic value: “Some people say ‘why don’t they just take her out of the water and use her for a museum?’ But people who have sailed on her understand how important this is for carrying her message and continuing her mission.”