In 2019, the town of Billerica realized there was a need to preserve their original articles of incorporation from the 1600's, colloquially known as The Great Deed. The Billerica Community Preservation Committee approved of CPA historic preservation funding that year, allowing the town to restore the original documents in 2020 and opening the way for the creation of facsimiles for public display. The full version of this article was originally published by the Northeast Document Conservation Center (NEDCC) in July of 2020. Written by Katie Boodle, Associate Paper Conservator for NEDCC. Reprinted by permission.

The Northeast Document Conservation Center (NEDCC) recently conserved the Great Deed for the Town of Billerica. The treatment was prompted by the building of Billerica’s new High School, which opened in September 2019. The conceptual design was to incorporate Billerica’s substantial history into the building. A significant part of the design was to include one and two story murals of the town’s history throughout the building. Of particular interest to the high school building committee was to have a wall sized mural of the Great Deed in a conference room that would be known as the 1655 Room. The high school building committee utilized the knowledge of Local History Librarian, Kathy Meagher, to evaluate the feasibility of this idea. She—along with the Town Clerk, Shirley Schult, who oversees the safety of the town’s records—accessed the town’s vaults to examine the Deed in person rather than the black and white photocopy available digitally. 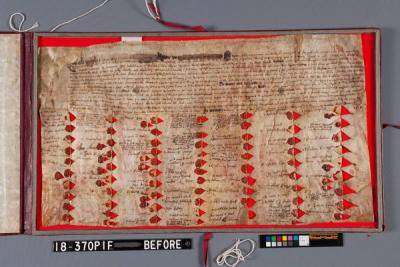 While the deed was in a leather-covered portfolio, parts of the cover were broken and the deed was very loosely hinged into the case. There were no additional protective layers or support to the piece when handling or trying to view the verso.  While preventing extensive mechanical damage, the cover did not protect the object from environmental conditions and the Great Deed had severely cockled due to changes in temperature and humidity. Kathy and Shirley both agreed that the deed should be better protected and preserved given its significance to the town.

Billerica’s first land grants were issued to Governor John Winthrop and Lt Governor Thomas Dudley in 1638. More land grants in this area were issued to important proprietors of Cambridge, making the Shawshin wilderness part of Cambridge. However, as more and more families settled on these grants, the need to self-govern became apparent. After a series of petitions to the court and other negotiations, the Town of Billerica was officially incorporated in 1655, though it took almost fifteen years for all the proprietor’s signatures to be collected. A final acquisition of approximately 8000 acres was agreed upon, the resulting document, “Billerica: Deed of Their Town from Cambridge Proprietors,” was created. It is more commonly referred to as “The Great Deed” by local historians and townsfolk. 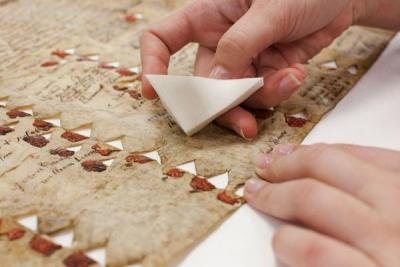 Prior to treatment, access to this important piece of the town’s history was very limited. Whenever it was viewed, the Great Deed was immediately exposed to direct dangers of the environment and of handling. This meant restricting access to the document to very serious inquiries only. Furthermore, considering the age of the Great Deed – over 360 years old – and the fact that it survived the burning of the Town Hall, they believed it was time to provide better housing to prevent future damage and offer greater protection against the elements.

In order to improve access and better protect the deed, Kathy Meagher and Shirley Schult decided to pursue Community Preservation Act (CPA) funding to treat the Great Deed and make it more accessible for the people of the town.

The Great Deed was housed in a full leather clamshell case with gold tooling and a red fabric interior upon its arrival to NEDCC. The date of the construction of this housing is unknown, but is believed to be sometime in the mid-20th century. The deed had been attached to the housing at the upper edge with 1” wide parchment strips. It was unclear if this was performed in tandem with the case construction or later in the deed’s history.

There was evidence that the Great Deed had been previously treated, and though the exact date of treatment is unknown, Billerica Town and Library staff believe it was performed in the late sixties or early seventies. Large parchment fills had been inserted throughout the document, with some fills hidden more successfully than others. The most obvious of the fills was present at the proper left of the deed (see the upper left corner in the image above), but upon closer examination somewhere between 10-15% of the document was believed to have been repaired in this manner. 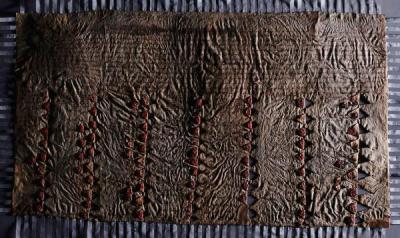 Due to the nature of parchment and how it reacts to environmental changes, the original parchment and historic repair parchment were in conflict with one another. These conflicting forces, combined with the numerous voids and seals, caused the parchment to cockle and pitch in irregular ways. The extent of this damage was best observed under raking light which gave a clear map of how the parchments pulled against each other throughout its history.

After thoroughly examining and documenting the Great Deed and speaking with archives staff, a treatment plan was proposed that would best stabilize and house the Great Deed for future generations of Billerica’s citizens. There were further discussions regarding increasing accessibility and display of the document in public spaces. While the Billerica CPA funds did not cover the cost of digitizing and creating facsimiles of the deed, the town felt it was important to be able to display a physical copy at the Town Hall, as well as provide digital access for researchers, considering the significance of the piece to Billerica’s History.

With the custom housing completed, the Great Deed and framed facsimiles were couriered back to the Town of Billerica. The framed facsimiles are on permanent exhibit and can be seen at Billerica’s Town Hall and in the 1655 Room at Billerica Memorial High School while the original deed remains protected and securely stored in the town’s vault.

Click here to read more about the detailed conservation treatment and rehousing of Billerica's Great Deed on the NEDCC website.