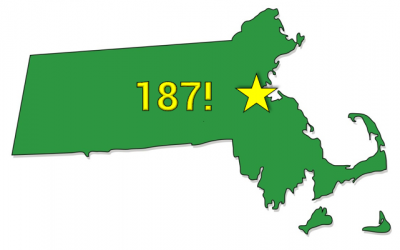 Thanks in part to a strong grassroots effort that garnered support from a wide range of local officials, the town of Brookline successfully voted to pass CPA adoption at their spring election yesterday. Brookline is the largest town in the Commonwealth, and will now become the 187th community to adopt the Community Preservation Act.

Brookline voters passed the CPA measure with an impressive 77% majority - tying with Wenham's 2005 election for the second largest margin of victory in a CPA adoption vote. The final tally was 5379 voting YES, 1672 voting NO. This means the town will now adopt a 1% CPA surcharge with exemptions for low income & low/moderate income senior homeowners. Their local surcharge is expected to raise approximately $2.6 million annually, with additional funding coming from the the annual distributions from the statewide Community Preservation Trust Fund.

Since 2018, every community that has placed CPA adoption on a local ballot has passed the measure, with Brookline's election being the 15th consecutive success. And with the Department of Revenue projecting record high CPA Trust Fund collections this year, it's very likely that we will continue to see more interest in CPA adoption continue into 2022. Without a state election scheduled for this fall, it's likely that Brookline will be the only new town to join the program during 2021, but it's clear that enthusiasm for the Community Preservation Act remains at an all-time high.