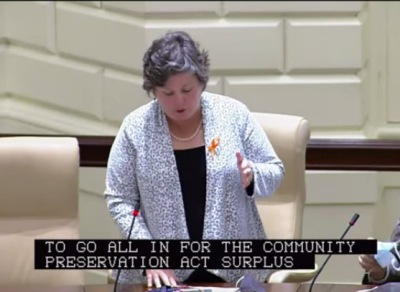 During the debate Senator Comerford took the opportunity to underline how important it is for the Legislature to continue its support for local CPA programs:

"I ask this Senate to go all in for the Community Preservation Act surplus funding," said Senator Comerford in her opening statement. "Imagine the good that this funding is doing in partnership with our municipal colleagues."

Acknowledging that the state legislature has supported the CPA Trust Fund with available state budget surplus funds every year since 2013, Senator Comerford urged the Senate to renew this commitment in the FY23 state budget. This additional revenue would help offset a dip in revenue seen in CPA Trust Fund collections over the last several months.

In April, the Department of Revenue projected that CPA communities could expect a 35% base distribution in November 2022, which would be a 20% decrease from 2021. According to the Coalition's estimates, an infusion of $20 million would allow the CPA Trust Fund to provide a distribution on par with last year.

We are extremely grateful for the support of Senator Jo Comerford who championed this amendment, as well as Ways & Means Chair Michael Rodrigues, Vice Chair Cindy Friedman, Senate President Karen Spilka, Majority Leader Cynthia Stone Creem, Minority Leader Bruce Tarr, and all the members of the Senate who signed on as co-sponsors.

What is the next step for this legislation?

What was included in the Senate budget amendment for CPA?

“SECTION XX. Notwithstanding any general or special law to the contrary, prior to transferring the consolidated net surplus in the budgetary funds for fiscal year 2022 to the Commonwealth Stabilization Fund pursuant to section 5C of chapter 29 of the General Laws, the comptroller shall transfer $20,000,000 to the Massachusetts Community Preservation Trust Fund established in section 9 of chapter 44B of the General Laws.”.