A transformative recreation project is under construction this summer in the Town of Boxford, known as the Boxford Common, that ultimately will serve three of the four CPA purposes. In 2007 the town acquired 75 acres of woodland in the center of town for $3.25 million. Following this purchase, a land use committee was formed and recommended constructing a recreational facility, including an artificial turf athletic field, on on a portion of the land, setting aside approximately 10 acres for future affordable housing and leaving the remaining land undisturbed for hiking, running, snowshoeing, cross-country skiing, and horseback riding.

The permitting and design process for the recreational area was a long process spread out over many years. With all approvals finally in hand, Boxford Town Meeting voted in 2015 to fund the construction of the recreational portion of the project. The project will be funded by $2.5 million from the Community Preservation undesignated cash balance, $1.5 million from a CPA bond, and $500,000 from private donations to cover the artificial turf surface.

Architect Huntress Associates designed a diverse recreational facility including one synthetic turf multi-purpose field for field hockey, football, lacrosse, and soccer; one natural grass multi-purpose field, a paved walking path, hiking trails, a logging road, and an area for turtle habitat. There are also plans for removal of invasive species and restoration of local flora. A new access driveway was constructed, consisting of new plantings including evergreen trees, ornamental trees, Maples, and Lindens, according to field architect Chris Huntress. There will be one parking lot with 50 spaces and another with 100, both adjacent to the fields.

Construction began in November of 2015, and due to the mild winter, the project is ahead of schedule. The first phase, construction of the turtle habitat pictured at right, was an interesting part of the project. The state's Natural Heritage and Endangered Species Program mandated construction of the habitat to provide a place for Blandings turtles to nest. It will be interesting to see if the habitat will be used in the future to help protect this endangered species. 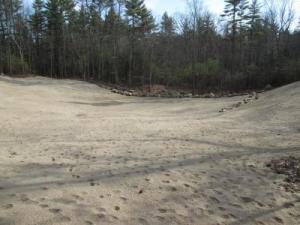 Thus far in Boxford, CPA has funded major projects including the purchase of Wunnegan Conservation Area, Cargill Fields, Davis Hayfield and Anvil Farm, the Lincoln Hall renovation, construction of a new playground at Cole School, and the rehabilitation of the historic Aaron Wood.

Prior to Town Meeting, advocates released a handout with the top ten reasons to vote yes for Boxford Common.  Town Meeting agreed that the project will benefit thousands: the seven hundred Boxford youth utilizing the athletic fields, fans on the sidelines, children using the playground area, seniors and others using the walking path and hikers able to utilize the woodlands. They believe it fulfills the mission of the project in supporting common goals for the common good – one of the major attributes of CPA.