Many communities are home to significant historic artifacts, but those with the Community Preservation Act are fortunate enough to have a source of funding to perform restorations of these valuable resources. We’ve picked out several projects that highlight the use of CPA funds to transform historical artifacts into unique icons for the public to enjoy.

The Town of Nantucket recently performed a restoration of a 1937 fire engine (see photo to the left), breathing new life into an artifact representing decades of vital public service. Retired in 1976, the 80-year-old engine nevertheless signified an important part of a bygone era firefighting history, so in 2014, the Nantucket Fireman’s Association received two grants from the Nantucket Community Preservation Committee to fully restore the engine. 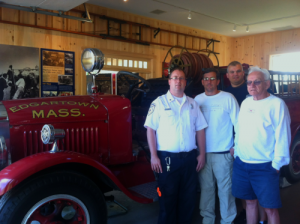 The restoration of the fire engine was completed by Firefly Restoration Co. based in Hope, Maine. CPC Chairman Ken Beaugrand claims that “the engine is clearly part of the historic fabric of the community. It fits perfectly into the context of what the CPC is meant to do in terms of preservation of historic artifacts and structures.” The Nantucket Fire Department originally purchased the vehicle for $6,000 in 1937, and thanks to over $164,000 funds from CPA and local donations, the engine has been preserved for decades to come.

Other communities have also restored fire engines, including Edgartown, Goshen, Lenox, Oak Bluffs, and Sharon. Oak Bluffs restored their 80-year-old Maxim fire truck in 2009 and in 2014, Edgartown used CPC funds to restore their 1952 Mack Fire Truck. The Edgartown engine was able to return to service that year after a party at the local fire station.

Clock at the Old Manse, Concord 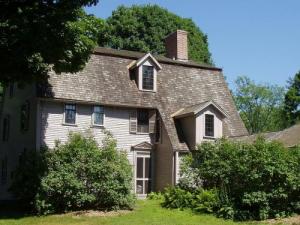 Another unique restoration can be found at the Old Manse located in Concord. Recognized as a National Historic Landmark, the Old Manse is a Georgian clapboard building constructed in 1770 for patriot minister William Emerson. Leaders of the Transcendentalist movement, including Bronson Alcott, Henry David Thoreau, and Margaret Fuller, discussed the issues of the day here and the site became the center of Concord’s political, literary, and social revolutions over the course of the 19th century.

The Old Manse sits on a nine-acre parcel of land in Concord near the banks of the Concord River, surrounded by rolling fields, apple orchards, and centuries-old stone walls. The Trustees of Reservations purchased the house and surrounding acreage in 1939 and today the Old Manse property provides access for canoeists to boat along the Concord River from its stone boathouse. The historic location also contains a network of trails and provides a link in the Bay Circuit Trail.

However, as with any historic resource, the Old Manse has experienced some wear and tear. The Trustees designed the Old Manse Management Plan in 2010 intending to restore the building and property, particularly the iconic clock inside the building. The clock is the “heartbeat of the house” and has stood there since 1775, still ticking in the same location as it did when the first shot of the American Revolution was fired. Prior to these renovations, the exterior of the clock, including some molding and inlay, had been damaged and the clockworks in the interior needed repair. 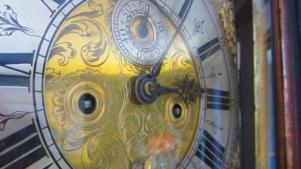 TTOR was awarded a CPA grant from the Town of Concord to perform this restoration, but there were some disputes regarding funding because the Old Manse is located on private property. Oftentimes, the question arises whether CPA can fund private projects, predominantly historic preservation projects. While the Community Preservation Act does not prohibit use of CPA funds for projects on privately-owned property, the Anti-Aid Amendment to the Massachusetts Constitution does prohibit the use of public funds to private entities for private purposes. View the relevant text of the amendment by clicking here.

The Town of Concord and the Trustees of Reservations acknowledged the Anti-aid Amendment prior to signing the grant for this project. Despite the wording of the Amendment, there is a way to make a grant of public money to private organizations, as any expenditure of public funds must be used to advance a public purpose. As the Department of Revenue points out in a February 2007 letter to the Town of Norfolk, the preservation of historic assets is generally understood to have legitimate public purposes. CPA funds may be able to fund a project on private property if the project is advancing a public purpose, such as the public acquiring a deed restriction, providing public access to the property where there was none before, or some other benefit. The Old Manse is a historical asset and benefits the general public for that purpose.

As the final act of the plan, the Town of Concord and the Trustees of Reservations signed a grant agreement prior to the start of the project. Many communities create grant agreements to set clear expectations when granting CPA funds for projects on private property. These agreements specify what the funds are intended to be used for, any conditions of funding, and reporting and monitoring requirements. They are executed after the municipality’s legislative body approves the use of the funds but prior to distributing the funds to the private organization. The agreement is then accepted and signed by both the municipality and the party receiving the CPA funds. Click here to view the grant agreement.

Restoration work on the building began in late 2015. Without the help of CPA funds, the Trustees would have been unable to restore this incredible historic resource for the public to utilize. 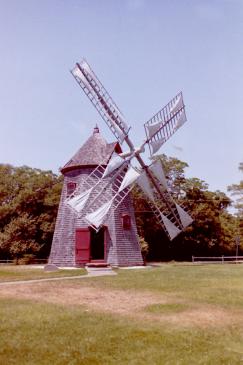 Our last artifact highlight is the restoration of the Old Windmill in the Town of Eastham. Originally built in 1680 in Plymouth, the windmill was then ferried across Massachusetts Bay to Highlands in Truro before being moved to Eastham by ox-cart in 1793. Although Eastham is not the original home of the windmill, it is an iconic Cape Cod artifact. The Eastham Windmill now sits on the site of Setucket Mill, the construction of which is generally attributed to Nicholas Paine in 1705. This piece of land once belonged to Giles Hopkins who came to Massachusetts on the Mayflower.

Eastham Windmill operated until 1900, and in 1920, the Village Improvement Society initially purchased it, followed by the Town of Eastham in 1928. The town restored the windmill and placed it back into operating condition. An extensive restoration project occurred in 1968, followed by the most recent restoration with CPA funds in 2008. These renovations included replacing the shaft and re-conditioning the iron wheels at a total cost of over $29,000 in CPA funds. The windmill is now open to the public each summer and offers a rare opportunity to witness the internal workings of an operating windmill. Fresh-ground cornmeal is sold, which helps finance the maintenance of the antique structure, making a visit to the Eastham Windmill an exciting and rewarding experience.