In 2008, after a failed rezoning effort left his clients short on hope and looking to cut its losses, a prominent Canton zoning attorney signed off on a request to demolish the buildings at Plymouth Rubber. The gauntlet was thrown down, and the situation looked bleak. Local preservationists on the Canton Historical Commission raised the alarm. The loss of these buildings would be the death knell for the history and heritage of what was once the home of Paul Revere. That was the year that the dream was born. The National Trust for Historic Preservation took note and that same year, Preservation Massachusetts declared the site at Plymouth Rubber as one of Massachusetts’ “Most Endangered Historic Resources.” 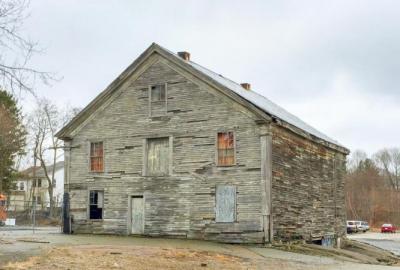 Eleven years later, transformation is at hand. The lessons of preservation, sound planning, and fortitude are apparent. Soon the earliest of fruit will bear forth from the meticulous organization of dozens of men and women who stood fast. There is a spirit in the project and a destiny that will forever cement Canton as one of the most historic industrial sites in Massachusetts. Delivering on the promise are countless individuals all working together to create the Paul Revere & Son Heritage Corporation. The work is painstaking and measured. Within days, the town of Canton will take ownership of the seven-acre parcel purchased through the Community Preservation Act (CPA). Within months, a destination restaurant will grace the lower floor of the Revere rolling mill. And within years a museum and cultural attraction will open in the renovated and spacious barn that once housed factory animals almost two centuries ago.

Where we stand today is worth taking note. For most of us, the process has taken so long that we fail to take stock as to how far we have come. The earliest days were dark indeed. The developer needed zoning changes and the town dug in after a handful of failed attempts. By the time the Planning Board and Board of Selectmen joined forces, a plan had emerged to bisect the land and embark on an ambitious plan to create a public-private partnership with the developer. The fragile plan took shape, and a special town meeting ratified the proposal. What emerged was a development agreement whereby the town of Canton would take title to two acres of land that contained a renovated mill building and historic barn. Also, the town would purchase seven additional acres of open space that would be transformed from industrial land to a stunning new park. 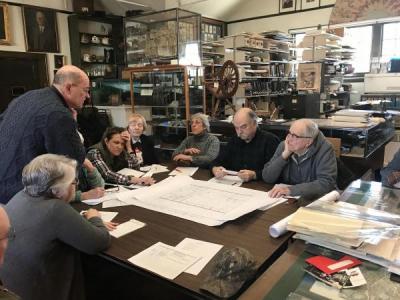 And the time has come. After all these years, the town is about to receive a deed for the open land. Funded through the CPA, the park is about to become public space. Over the past several months a flurry of activities became a crescendo of accomplishments. A declaration of covenants has been drafted, the deed for Lot 3B (as it is legally known) was created. And the Canton Historical Society has negotiated the conservation and preservation restrictions that will run in perpetuity with the land to ensure that “forever” this will remain open space for the enjoyment of all. Dozens of park benches have arrived to be fixed along the walkways, and lighting has been installed to aid visitors at night.

Over the last several months, a committee has been formed to recommend and designs 10 wayfinding signs that will share the story of the land and buildings. The plan to use CPA money to install interpretive panels will be voted on at annual town meeting in the spring. The committee for the signage has met dozens of times and developed themes that cover several topics that visitors will encounter on the property. Manufacturing, water power, Paul Revere’s House, immigration and workforce development and preservation will all become learning moments as visitors walk the grounds.

Meanwhile, a lease agreement for the restaurant space was negotiated last fall and architects are busy designing a splendid space for the dining and private spaces. A chef is dreaming of the delights that will be sourced from local farms and CSA’s that will grace the banquettes inside the brick mill. The pedigree of the new restaurant is well established. The restaurateurs behind what will become Northern Spy (a popular cultivar apple that was the rage in the 1800s) have successfully operated Loyal Nine in Cambridge. There is little doubt that for “foodies” there is an exciting new destination on the horizon later this year.

The second floor of the mill features gracious open seating spaces for public and private meetings. The local Paul Revere Heritage Commission has formed several subcommittees and one in particular has been studying ways to place preview exhibits inside the mill to stimulate ideas for the museum in the adjacent barn. With exhibits ranging from historic industries and innovation to cutting-edge entrepreneurial activities happening today in the Neponset Valley, the preview room promises to capture the enormity of skills and ingenuity of the region.

Meanwhile, back outside the mill, near the newly created stone southern courtyard, the Canton Garden Club has designed a “Heritage Garden” that harkens back to the local plants of the early 19th century. A 38-foot backdrop of native plants is being created as a beautiful tribute to the men and women who worked in the mills of Canton. Red Twig Dogwoods, Ruby Spice Clethra, Hayes Starburst Hydrangeas, and Bearberry are just some of the plants that will become a beautiful attraction for visitors. Rumors of a cutting from a lilac tree that once graced Paul Revere’s home in Canton — and is now in the courtyard of the Paul Revere House in Boston — may mean that a symbolic piece of our very own history will be returned to grow and flourish. 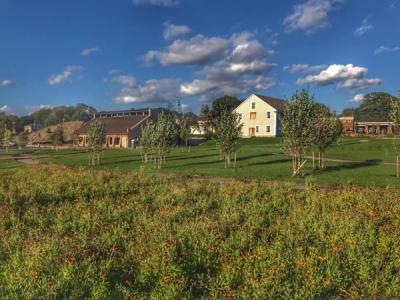 And, of the museum, a new nonprofit corporation is being created to move the Paul Revere & Son Heritage Corporation into reality. Board members will soon be chosen and work to raise the hundreds of thousands of dollars for operating costs and design for the museum will get underway. The planning has been careful and measured. Historians, educators, financial experts, town leaders, ordinary citizens, and even high school students have been involved. Meetings last for hours on end, and every concept is being tested through marketing and economic experts. A solid foundation is being laid, stone by stone, to make good on the promises and pay respect to one of the greatest patriots in American history.

From that moment in 2008 when this site was endangered, a lantern was lit to preserve this site. We said “no” to demolition and replaced the wrecking ball with a dream built on heritage and respect for the past. Today, Canton is coming into its own and celebrating our place in history. Welcome to the Paul Revere Heritage Site.