Keeping up with the latest trends isn’t easy, and it can be especially difficult for municipalities with limited resources. While residents are ready and willing to jump into the latest craze, municipalities can often struggle to quickly implement changes and meet the needs of the community. Pickleball is a recent example of this trend, and it’s taking the outdoor recreation world by storm. This quirky sport has been sweeping the state and has become wildly popular in all parts of Massachusetts. The good news for all of these new pickleball fans is that CPA funds have enabled communities to bring this all-ages sport to their residents by building new pickleball specific courts (as Randolph has done) or by adapting existing basketball and tennis courts to accommodate for this pastime. 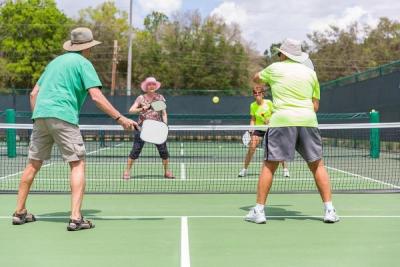 So what is Pickleball anyway? While many have only heard of it in the last few years, it’s actually been around since the late 1960’s—the first tournament was held in 1976 and the first rule book for the game was published in 1984. The USAPA (USA Pickleball Association) defines pickleball as a paddle sport that combines elements of tennis, badminton, and ping-pong, and it’s easy to see why it’s been exploding in popularity. It can be played indoors or outdoors, as doubles or singles, and is suitable for all ages and skill levels. That’s a pretty wide appeal!

Randolph is a perfect example of how CPA funding can help municipalities keep up with latest trends in recreation. The local pickleball group in the town grew from 3 players to 50 in just the last two years, and continues to expand. Despite its rapidly growing popularity, there were no dedicated spaces for the game to be practiced or played. Players were using basketball courts at the town’s Intergenerational Community Center as makeshift indoor courts, and when the weather permitted, they would have to work around other programs at Belcher Park to play outside. But in early 2018, the town requested $50,000 in CPA funds to construct 3 new outdoor courts specifically for pickleball at the Randolph Intergenerational Community Center (RICC). The project was approved in June of 2018, and will be ready for players in summer 2019.

t’s no wonder communities are spending their CPA recreation dollars on this sport—it has broad appeal as a social activity that’s easy to learn and play if you’re 16 years old or 60 years old. Communities can build pickleball specific courts or even modify existing basketball or tennis courts, and CPA funds have done both. In just the last few years, 16 communities have now appropriated funds for pickleball, including Abington, Agawam, Belchertown, Belmont, Boxford, Chatham, Eastham, Easthampton, Marshfield, Mashpee, Nantucket, Randolph, Sandwich, Sudbury, Wellfleet, Westford, and Yarmouth. Will your community be the next to catch pickleball fever?