Historic preservation, open space protection, recreation, and affordable housing needs sometimes extend across CPA town boundaries. For example, sometimes a large, important open space parcel spans the borders of two or three neighboring communities. Or a regional school that serves two different CPA communities, but is physically located in just one of those communities, needs to rehabilitate its recreational playing fields. Increasingly, CPA communities are receiving funding requests for such regional CPA projects, and many are enthusiastically responding with grants of CPA funds.They are finding that if each community contributes some of their CPA funds towards the project, the sum can be greater than the parts, and all of the communities benefit.

The CPA statute (MGL Chapter 44B) specifies, in Section 6, that CPA funds can be expended “in any city or town”, presumably, of the Commonwealth. When the Legislature amended the CPA statute in the summer of 2012, one phrase was added to Section 5 (b)(1) specifically to encourage CPA communities to study and contemplate funding regional projects, as indicated in the following excerpt: "The Community Preservation Committee shall study the needs, possibilities, and resources of the city or town regarding community preservation, including the consideration of regional projects for community preservation." Thus far, regional projects have been proposed in every CPA programmatic area, though the most common ones are in the areas of active recreation and open space preservation. Examples of some CPA-funded regional projects approved around the state follow.

Martha’s Vineyard is a definite trend-setter in completing regional projects. The towns of Aquinnah and Chilmark adopted CPA in 2001, and the remaining four towns, Edgartown, Oak Bluffs, Tisbury, and West Tisbury, followed in 2005. Although these towns have all individually completed a wide variety of projects using CPA funding, collaborating on regional projects has become a popular alternative. So far, Martha’s Vineyard’s 6 communities have collaborated on affordable housing, historic preservation, and outdoor recreation projects. 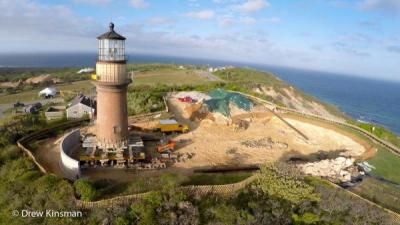 One particularly successfully Vineyard regional project is the recent preservation of the Gay Head Light House. This landmark was considered one of America’s 11 Most Endangered Historic Places of 2013. It was sitting 43 feet from an eroding cliff. In May 2015, it was moved about 150 feet from the cliff, buying another 140 years before its next move. To read more on the Gay Head Light project, click here.

The success of the lighthouse relocation project was dependent on the cooperation from all of the towns on the Island, according to Derrill Bazzy, chairman of the Aquinnah committee. In addition, Joan Hughes, Oak Bluffs CPC chairman claims the community was especially engaged due to their unanimous appreciation of the lighthouse as an icon of the Island. The project cost about $3 million. Aquinnah requested a total of $500,000 in community preservation funds from the five other towns of Chilmark, Edgartown, Oak Bluffs, Tisbury, and West Tisbury, and contributed $100,000 itself. Remaining funding came from fundraising events, grants, and $1.9 million in individual donations. Thanks to the dedication and commitment of all six CPA towns on the island, the Gay Head Light was relocated, and its light shines on.

Another successful regional project was completed through the collaboration of the four towns of Conway, Sunderland, Whately, and Deerfield. The project involved the rehabilitation of the Frontier Regional School Tennis Courts, a recreation facility used by residents of all four towns. The tennis courts were in poor condition, and some minor repairs were made to them in 2011. However new cracks developed, putting the courts at risk of becoming unsafe and completely unusable.

In order to rehabilitate the courts, the Frontier Regional School Committee initially applied for CPA funding from the two communities of Deerfield and Sunderland. However Deerfield officials requested that the School Committee apply for CPA funds from all four towns served by the regional school, based on enrollment. The requests were recommended by all four towns’ Community Preservation Committees, followed by voter approval at subsequent annual Town Meetings.

The tennis court rehabilitation project was completed in the summer of 2014. Without the persistence and collaboration of the towns of Conway, Sunderland, Whately, and Deerfield, the Frontier Tennis Courts would not be usable today.

A similar project was undertaken by the towns of Dennis and Yarmouth, when they collaborated to restore their own tennis courts at the Dennis-Yarmouth Regional High School. The Community Preservation Committees in both towns eagerly agreed to recommend funding for this project, and both Town Meetings concurred. The total cost of the project was $125,000. Yarmouth contributed $81,967, and Dennis contributed $43,033. Ten tennis courts were rehabilitated, a project that, according to district Facilities Manager Sandra Cashen, was twenty years overdue. A celebration of the rehabilitated courts was held on October 4, 2014. According to Cashen, the communities are pleased with the improvements and the courts are getting lots of use.

And in 2010, the towns of Harwich and Chatham made a collaborative purchase of land for open space conservation at Mill Pond Watershed. Because the town of Harwich abuts the Chatham watershed, the two communities each contributed CPA funding to purchase a section of the land: 20.02 acres by Harwich and 18.69 acres by Chatham. Working together, the towns put together close to a million dollars of CPA funds and state grants towards the preservation of the watershed land as a shared resource.

Regional projects are a growing trend for CPA. As Derrill Bazzy, longtime Chair of the Aquinnah Community Preservation Committee claims, “We realize regional applications are only going to increase.” He adds, “It’s a beautiful way to fund things.” CPC Executive Director Stuart Saginor adds, “The state of Massachusetts is very interested in cost savings from regional projects. There is no mandate that communities must do this…but it was recognition by the state legislature that CPA is the type of program that could benefit from regional projects.” We hope to see continued effective collaboration and positive community-wide results in the future.