A beloved landmark for the island communities of Martha's Vineyard, the iconic Gay Head Light was dangerously close to the edge of the eroding cliff it has stood on for 158 years.Sitting only 43 feet from the edge of the bluff, the lighthouse was listed as one of America’s 11 Most Endangered Historic Places in 2013. Now it has been saved through the hard work of residents and a unique case of Island-wide CPA collaboration. 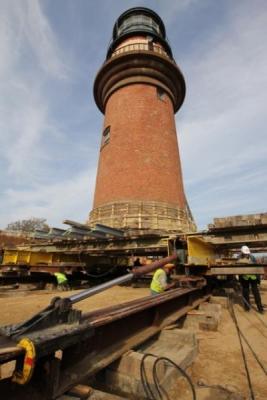 The first step was to secure ownership of the Gay Head Light by the town of Aquinnah, which required approval by three federal agencies (National Park Service/Department of the Interior, US Coast Guard and General Services Administration). The US Coast Guard will still oversee the actual light to safeguard its navigational purposes.

In order to begin the move, Aquinnah needed a new location for the Light.  About 150 feet from its  current location was a perfect fit. The new spot protects the Light from erosion for a minimum of 140 years, according to a scientific analysis of historical erosion rates. It was important the Light not move very far from its  original location due to its operational requirements as a working lighthouse

The current brick structure was built in 1854, replacing the original wooden structure built in 1799, originally commissioned by President John Adams. The beacon was installed and lit for the first time in 1856. To relocate such a meaningful and historic structure, a true expert was needed; Aquinnah contracted with the International Chimney Corporation to complete the move. The Corporation has previously moved several lighthouses including a similar brick masonry lighthouse on Nantucket, Sankaty Head Light. 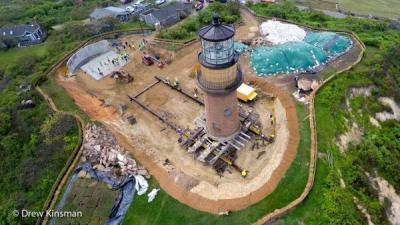 The $3 million budget for the move was comprised of CPA funding from all six Vineyard towns, including Aquinnah where the lighthouse is located, Chilmark, Edgartown, Oak Bluffs, Tisbury and West Tisbury. Additional funding came from fundraising events, grants and $1.9 million in individual donations. “This move could not have happened without CPA funding, period”, Bazzy remarked, “The first dollars raised were CPA dollars and that allowed us to leverage other funds, including significant contributions from private donors”.

The ability of the whole island community to come together is a tremendous example of a regional CPA project. “Little Aquinnah” as Bazzy affectionately refers to his community, could not have covered the costs of this project alone. With an annual town budget of $4 million, the $3 million required for the move would have been unimaginable without the CPA funds provided by the other Vineyard communities. The iconic lighthouse “connects the island across town borders”. “CPA is, once again, a game changer”, Bazzy concludes.