The Community Preservation Act (CPA) is the result of nearly two decades of hard work devoted to passing legislation that would give all 351 Massachusetts cities and towns a tool to preserve their most unique natural, community, and built features in the face of rapid growth and development.

While the Commonwealth enjoyed healthy growth in the period following World War II, beginning in the 1980s, communities long blessed with a beneficial mix of farms and forests, historic town centers, and compact patterns of development began to find that they no longer recognized themselves. Some communities wanted to protect working farms, others desired to protect historic buildings from being razed, and still others strived to provide affordable housing to enable the next generation of long-time residents to remain close to home. 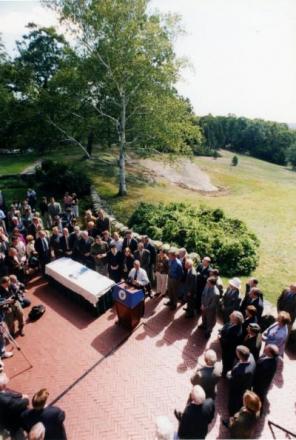 The concept of a statewide enabling authority to preserve community character had its original inspiration in the Nantucket Islands Land Bank, the first program of its kind in the United States, passed in 1983. This land conservation program was created to acquire, hold, and manage important open space resources and endangered landscapes of Nantucket Island for the use and enjoyment of the general public. The Land Bank levies a 2% real estate transfer tax (RETT) on the sale price of a property. The program was conceived by Nantucket’s planning commission, adopted by the voters of Nantucket, and established by a special act of the Massachusetts legislature.

Over the next several years, the legislature was flooded with a wide range of land bank proposals based on the RETT model. Some provided universal enabling authority for all cities and towns. Others were targeted at a specific city or town via a so-called home-rule petition. In 1987, Representative Robert A. Durand sponsored the first bill that would have allowed land banks to create affordable housing and conserve land. While this bill was unsuccessful, Durand tirelessly championed the paired concepts of land conservation and affordable housing in the House and later in the Senate. In 1997, Durand linked them with historic preservation and filed the first legislation entitled the Community Preservation Act. Finally, when he served as Governor Paul Cellucci’s Secretary of Environmental Affairs, Durand built the groundswell necessary to lift support for the CPA, allowing it to become law. CPA was ultimately approved by the legislature and signed by Governor Cellucci in September, 2000.

The text above is excerpted and adapted from Matthew Zieper’s essay, “The Massachusetts Community Preservation Act, A Case Study in Fostering Intergovernmental Partnership in Conservation Finance,” in Conservation Capital in the Americas. (James N. Levitt, Editor. Lincoln Institute of Land Policy, 2010.)