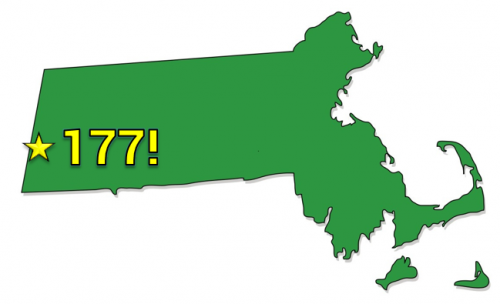 While most of the buzz on CPA adoption this year is focused on the November election, West Stockbridge residents decided last night to create a mid-summer headline: they have now voted to become the 177th CPA community!

During last night's annual "spring" election (delayed from their original early May date), West Stockbridge voters passed the CPA measure with a sizeable majority - the question passed at the ballot with 79% in favor of adoption CPA (263 voted YES, 70 voted NO). The town adopted a 2% CPA surcharge with exemptions for the first $100,000 of residential property value and low income & low/moderate income senior homeowners. Their local surcharge is expected to raise approximately $76,000 annually, with additional funding coming from the the annual distributions from the statewide Community Preservation Trust Fund.

And West Stockbridge may not be alone in adopting CPA in 2020. Earlier this month, the town council in Franklin voted 9-0 in favor of placing CPA adoption on their November ballot. Coincidentally, voters will now be deciding whether or not to adopt the program with the exact same specifications that West Stockbridge just approved of: a 2% CPA surcharge with exemptions for the first $100,000 of residential property value and low income & low/moderate income senior homeowners. Franklin is now the third community to be voting on CPA adoption later this year, joining the town of Lancaster and the city of Greenfield.

With the addition of West Stockbridge, CPA has now been adopted by over half of all municipalities in the Commonwealth - and it's certainly possible that we may see this number climb even higher before the end of the year. Several communities could still place CPA on the November ballot, as many town meetings were rescheduled for the month of July, and a few city councils are continuing to discuss their CPA options throughout the summer. As always, we will post any new developments on our CPA Elections page.