On November 8th, voters in five towns (Boylston, Burlington, Natick, Shelburne, & Westbrough) and one city (Worcester) will be deciding whether or not to adopt the Community Preservation Act. Local advocates have been ramping up their campaign efforts in order to educate their neighbors about the benefits of CPA.

The City of Worcester is perhaps the campaign with the biggest “buzz” this year, and certainly the community with the most media attention surrounding their CPA election. A group of advocates flying the banner of “Yes for a Better Worcester” have been working for several years to have their city consider CPA adoption, and 2022 will mark the very first time that Worcester has ever brought the question to the ballot. Earlier this week the group held an official launch event for their campaign, but local discussions on the merits of CPA were already in full swing over the summer. The Worcester Regional Research Bureau published a report in August analyzing the costs and benefits that the city could expect should it adopt the CPA program, and ultimately concluded that “The Community Preservation Act is a worth opportunity to fund investments in community livability.” To back this up, the “Yes for a Better Worcester” campaign website even has a CPA calculator that allows users to look up how much CPA adoption would cost them, and even has separate calculations for residential and business properties. 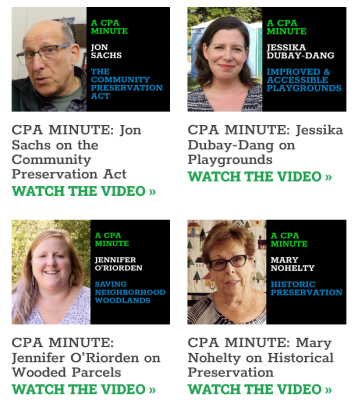 Meanwhile in the town of Burlington, the “Vote Yes CPA Burlington” campaign is another example of a group of advocates that have been steadily working for several years to bring CPA adoption to their town. Initially waylaid by the pandemic, advocates are now promoting CPA armed with trifold handouts, pens, and campaign cards that were originally planned for an adoption attempt in 2020. But that’s not all—on their campaign website, the Burlington campaign has been steadily releasing a series of great testimonials called “CPA Minute Videos.” In this series, members of the community explain how much CPA could make a difference in Burlington, focusing on topics like accessible playgrounds, affordable housing opportunities, and event specific project ideas like a town swimming pool and the historic Francis Wyman House. For a program with as many moving pieces as CPA, this is a great way to educate potential voters in a bite-sized, easy to understand format. 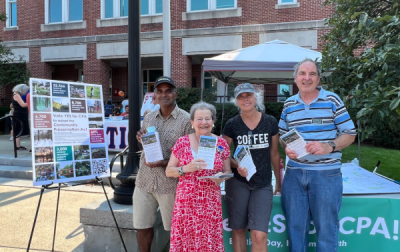 And in the town of Natick, the “CPA for Natick” advocates have generated a lot of excitement for CPA adoption during local events over the summer. During “Natick Days,” an annual festival celebrating the community, the campaign set up a tent to share informational flyer and talk with neighbors about how CPA could make a difference. After publishing an incredibly thoughtful study report in advance of their spring town meeting, the Natick campaign is focused on presenting the benefits of CPA in a comprehensive, easy-to-understand way—and as most CPA advocates can attest, the better that voters understand how CPA works, the more likely they are to support it!

Advocates in the towns of Boylston, Shelburne, and Westborough have also been gearing up to promote the CPA program in the coming weeks, so there’s plenty of great activity happening in each of these six communities. As the total count of CPA cities and towns continues to climb closer to reaching the 200 mark, it will be exciting to see what happens during this November’s election season.