Open space preservation is a key component of the Community Preservation Act (CPA), and over 23,000 acres have been preserved with CPA funds since the Act was passed in 2000. Although many CPA open space projects have been completed independently by CPA cities and towns, some communities have found it helpful to partner with third party land protection organizations. One recent example is Bridgewater, which collaborated with The Trust for Public Land on a project to preserve Murray Farm in Bridgewater.

Acquired by the Murray family in 1906, the 60-acre Murray Farm produced dairy, potatoes, and firewood successfully for many years. Today, two Murray family descendants own the original farm, and third generation Bridgewater farmers Bob and Dave Hanson lease the land to support their own nearby Hanson Farm and Sugar Hill Dairy. The Hansons grow straw, hay, corn, squash, and pumpkins on Murray Farm, and operate a farm stand that is popular with Bridgewater residents. 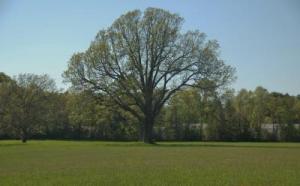 Murray Farm was listed for many years as a priority property for preservation on Bridgewater’s Open Space Plan, Community Preservation Plan, and Master Plan. And Peter Murray, grandson of farm founder J.H. Murray, was anxious to keep the land in agriculture, noting that “In my lifetime, I’ve seen most of the farms in Bridgewater go away and become housing developments.” So when Bridgewater adopted the Community Preservation Act in 2006, Peter Murray was an enthusiastic supporter, feeling that it might ultimately help the town preserve its agricultural heritage.

In the fall of 2013, a developer expressed interest in creating a single family home subdivision on Murray Farm, so the town of Bridgewater turned to The Trust for Public Land for help. Darci Schofield, project manager for The Trust for Public Land, explained that the town had been trying to protect Murray Farm since 2008, and eventually contacted her for assistance with the complex deal when it was unable to bring it to a successful conclusion. According to Schofield, The Trust for Public Land pays for appraisals and other project-related costs, and assists communities with putting together a funding packet for open space parcels they want to preserve, but it does not pay for the actual purchase of the land. 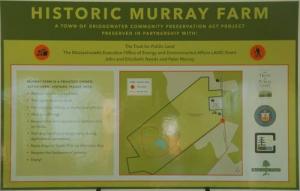 The Trust for Public Land managed the negotiations between the town of Bridgewater and the landowners, ultimately leading to the successful preservation of the farm’s two neighboring parcels – one owned by the Murray family, the other by their cousins, the Needs family – using conservation restrictions. Bridgewater formally acquired the development rights for the parcels on December 19, 2015 for nearly $1.3 million, $882,000 in CPA funds, and $400,000 in the form of a Local Acquisitions for Natural Diversity, or LAND, grant, provided by the Massachusetts Executive Office of Energy and Environmental Affairs.

Without Bridgewater’s embrace of CPA, and without the help of The Trust for Public Land in negotiating this complex land preservation deal, Bridgewater would have lost yet another piece of its agricultural past. Today, Murray Farm is protected for its scenic and wildlife habitat values and its agricultural operations and heritage. Peter Murray also noted that the wooded portions of the property are now open to the public for hiking, with South Shore-based Wildlands Trust, a local land trust, managing the trails. Murray Farm’s fertile soil will continue to yield produce for the local market, and the land is now a piece of Bridgewater’s agricultural heritage that the public can enjoy forever.