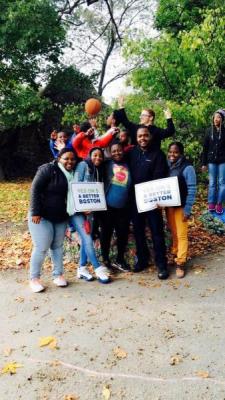 In early 2015, a coalition of nonprofit partners representing parks and open space, historic preservation and affordable housing met to discuss a potential ballot measure campaign to pass the Community Preservation Act in the city of Boston. In May 2016, with support from Mayor Martin J. Walsh, the Boston City Council voted 12-1 to send the Community Preservation Act to the November 2016 presidential ballot. The Trust for Public Land co-led the coalition and management of the ballot measure campaign and led fundraising efforts. On November 8, 2016, CPA was adopted overwhelmingly by Boston voters with 73.6 percent support.

In the fall of 2015, the campaign coalition hosted a meeting with Mayor Walsh and shared positive information about a recent public opinion poll that showed strong support for CPA. The Mayor came out in support of the effort, as did 12 of the 13 Boston city councilors. Coalition members identified two Councilors who were especially enthusiastic about passing CPA in Boston: At-Large Councilor Michael Flaherty from South Boston and District 4 Councilor Andrea Campbell from Dorchester. They worked closely with their offices to help draft the CPA Order that would place CPA on Boston’s November 8, 2016 ballot.

That spring, the campaign coalition officially became the “Yes for a Better Boston Committee” (YBB) and launched a “Yes for a Better Boston” web page: yesbetterboston.org, as well as a social media accounts on Facebook and Twitter. YBB utilized the messages tested in the 2015 public opinion survey and, based on that information, prepared their outreach and education effort. This included: 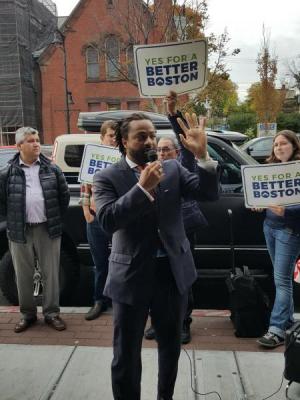 An opinion poll showed that transparency and accountability were critical to Boston voters. YBB also knew from polling that Boston voters were generally comfortable with the “price point” for CPA. With this in mind, the Boston Assessing Department created an online calculator that enabled any property owner in Boston to type their address to calculate their annual property tax surcharge if CPA passed.

The campaign benefited from positive media coverage including several supportive editorials and columns in the Boston Globe, a strong opinion from the former President of the Mass Taxpayer’s Foundation in Commonwealth Magazine, and additional stories, editorials, and op-eds in weeklies and radio interviews. YBB also paid for advertisements in weekly neighborhood newspapers.

While working to get CPA on the ballot, YBB simultaneously mapped out a robust campaign plan, putting together a steering committee that met weekly with the campaign team. They also arranged meetings with with elected officials, nonprofits, business leaders and associations, and foundations and potential donors to raise funds, grow the coalition, and recruit volunteers.

At every election, there are voters who know little or nothing about a ballot question until they enter the ballot box, so easy-to-understand ballot language is critical to a measure’s success. With this in mind, as soon as the CPA Boston Order was enacted in May, the campaign drafted clear CPA ballot language that utilized both polled messages as well as longer, more technical ballot language that had already been approved by most cities and towns that had passed CPA.

For the first time, the state of Massachusetts opened polls for early voting from October 24 to November 4. During early voting, YBB mailed two educational pieces to let voters know about early voting, how to register, and where they could vote. They also had field staff and volunteers working at every early vote poll location. 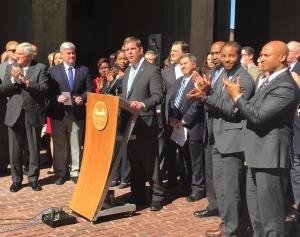 As Election Day neared, YBB made full use of campaign staff and coalition members to help get out the vote by persuading voters to get to the polls to vote “yes” on Question 5. Efforts by the campaign to increase voter turnout included paid advertisements in local weekly newspapers, community forums and special events, op-eds, and editorials. Additionally, thousands of door hangers were used in door-to-door canvassing and two pieces of 8x10 “vote yes” mail were sent to 75,000 targeted households.

To prepare for Election Day, the campaign educated volunteers not only about CPA program itself, but also about how to directly engage voters at the polls on Election Day. Instead of merely holding signs, every volunteer was provided with a lanyard with “Vote Yes on 5” messaging so they could use their free hands to distribute palm cards and urge voters to find Question 5 on the last page/back of their ballot.

The Boston campaign was an outstanding win due to committed leadership, dedicated volunteers, consistent messaging, and effective fundraising efforts. It resulted in a unified community effort and Boston CPA supporters are justifiably very proud of their success.